Thousands of shoppers trapped in a mega shopping center for two days sounds like a plot for a thriller. It actually happened in Shanghai during the recent COVID-19 outbreak and spawned heartwarming stories, providing a silver lining amid the pandemic.

When Wang Zimo entered the Global Harbor mall on January 13, he never imagined what would happen to him over the next two days.

The largest downtown shopping mall in Putuo District, covering 480,000 square meters, was locked down for 55 hours from Thursday morning for COVID-19 screening. Thousands of shoppers were quarantined in the mall for several rounds of nucleic acid testing.

The mall opened its cinemas for the customers to sleep and distributed toiletries, pillows and blankets. Many restaurants offered free food and drinks. Some tents from camping stores were set up for people to rest.

Blockbuster films were played on the large screens, while some entertainment sites opened their facilities for free. Maternity and infant stores gave out toys to appease stranded children, and a beauty salon invited the elderly to sleep on the hairdressing chairs.

The shopping center reopened on Sunday morning after all customers and staff tested negative. The boss and senior officials of the mall presented flowers and small gifts to every leaving customer in gratitude for their cooperation.

An official of Global Harbor presents a gift to a senior customer who was among those quarantined at the mall in Putuo District.

‘Best out of the worst’

“It was the best out of the worst (situation) for us to be quarantined in such a shopping complex,” said Wang. He filmed a short video to share his special experience during the quarantine, which has gone viral on the internet and become an online sensation.

Wang, a junior high school student, was quarantined along with six of his classmates. They had planned to play a popular room escape game in one of the stores, but surprisingly found that they could not leave the mall.

“I was astonished because such things only happened in movies or on television,” recalled Wang. “But I was not worried at all, because the staff and shop owners treated us warmly with free food and drinks.”

Updated information was broadcast on time. Mall staff maintained order and reminded people to wear masks round the clock. Bottled water was distributed frequently. Wang said when they woke up in the morning at the cinema, the mall had prepared hot breakfast – steamed buns and boiled tea eggs – for everyone. 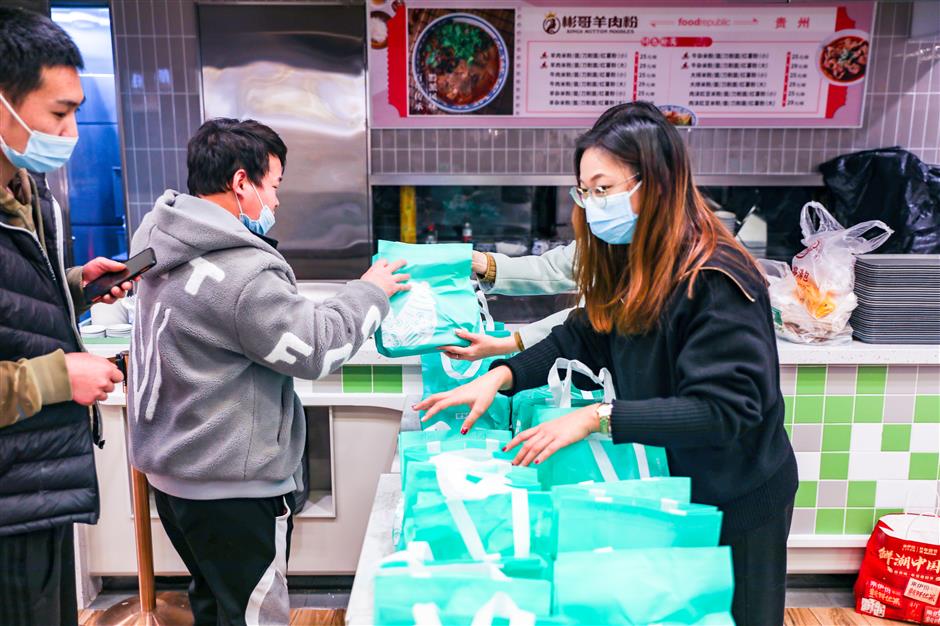 A restaurant presented free meals to quarantined customers at the mall.

The mall had prepared more than 10,000 sets of meals and numerous daily necessity items for customers during the lockdown, according to an emergency response set up last year, said Miao Cuiyan, general manager of the mall.

The staffers were divided into different groups to assist in nucleic acid testing, registering information, delivering food and coordinating supplies, she said.

Elderly customers and children enjoyed priority in undergoing the tests first, followed by ordinary customers. The staffers and shop owners were asked to stay until all the customers had left, revealed Miao, who was also quarantined in the mall.

“I was touched by the kindness of both the customers and business owners,” she said.

Huang Jiaqi, the owner of a postpartum recovery salon, voluntarily took care of an 88-year-old woman, said to be the oldest among the quarantined customers. She invited the senior to sleep on the most comfortable chair in the salon. Huang slept on the ground with her employees.

“The quarantine brought the customers and business owners in the mall closer,” she pointed out. 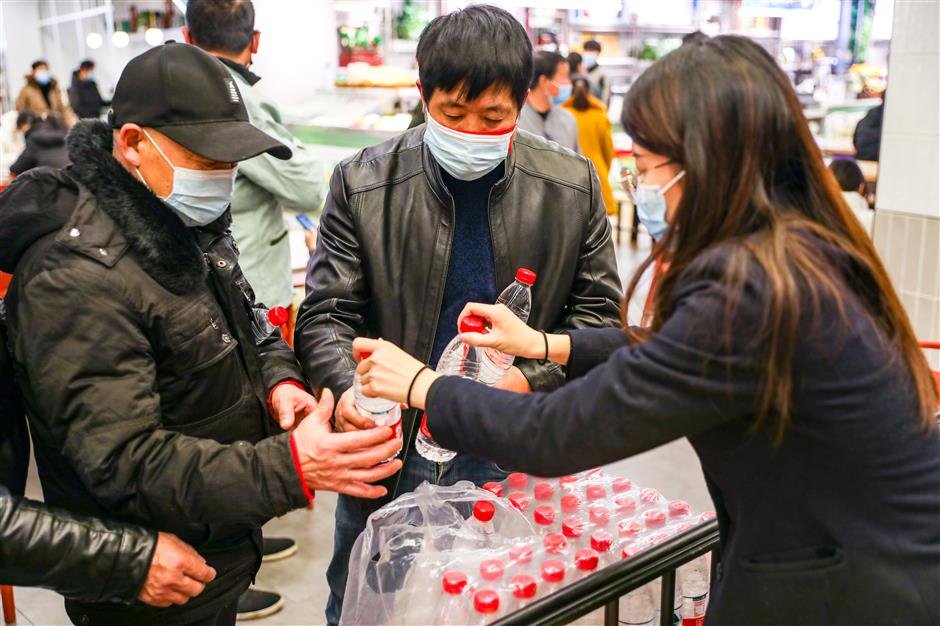 The mall provides bottled water to customers during the quarantine.

Zhang Wei, a nearby resident living on Jinshajiang Road, was among the most anxious people when he heard that the mall was locked down. His 7-month-old son was quarantined inside the mall with a nanny, who took the baby to the mall for an after-meal walk.

His anxiety was eased soon after the babysitter told him on phone that many infant stores at the mall had voluntarily provided milk powder, feeder and even toys.

“I felt relaxed after hearing my son was playing happily in a children’s playground and had even slept for a while,” Zhang said.

The mother of Cui Wenwei, a junior school student who was quarantined in the mall alone, waited for her daughter outside the mall, just as worried as Zhang.

However, Cui told her that all was well and that she was being well entertained inside the mall. The SEGA Joypolis, an amusement park, invited Cui and other children to use the games facilities for free.

After the gaming time, a staffer asked her to have lunch and undergo a nucleic acid test. She then enjoyed a midnight snack from a sushi restaurant, with the chef cooking seafood congee for her, Cui told her mother by phone. 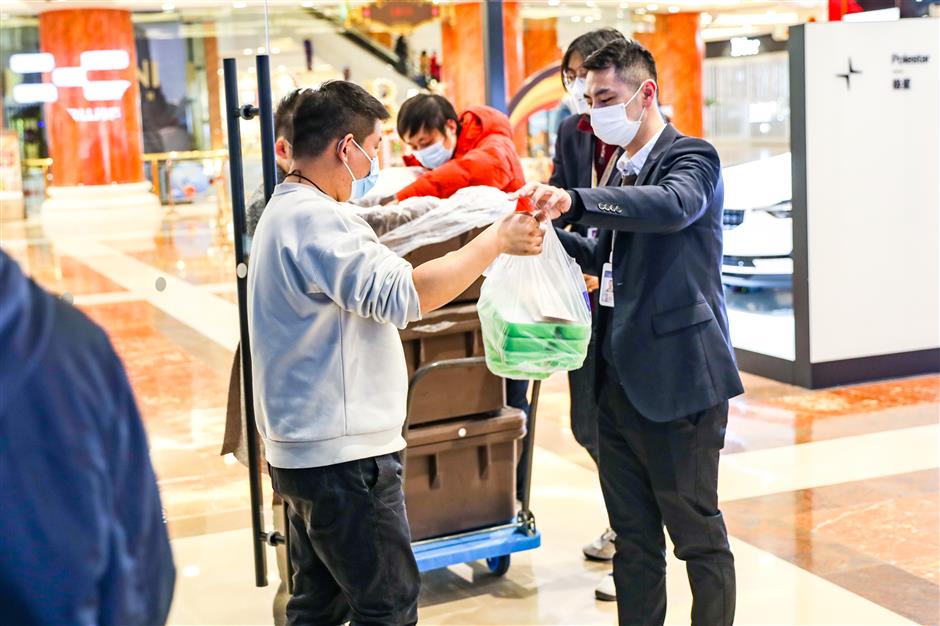 A staffer presents meals to customers.

“I think it was a valuable experience for her to handle the emergency situation alone,” the mother said.

When the mall reopened at 10am on Sunday, Ding Zuohong, president of Yuexing Group that owns the mall, presented red scarves and masks to every customer.

The popularity of the mall did not seem to have been affected by the lockdown. A long line of customers waited outside the mall for its reopening. They were required to scan their health QR code and receive temperature checks at the entrance.

“Our devotion to customers during the lockdown was subtle compared with the medics and community workers who fight COVID-19 on the front line,” said Ding.

“The lockdown was a great test for the mall, which aims to become a safe and warm shopping destination and further boost the consumption of the city amid the pandemic,” he added. 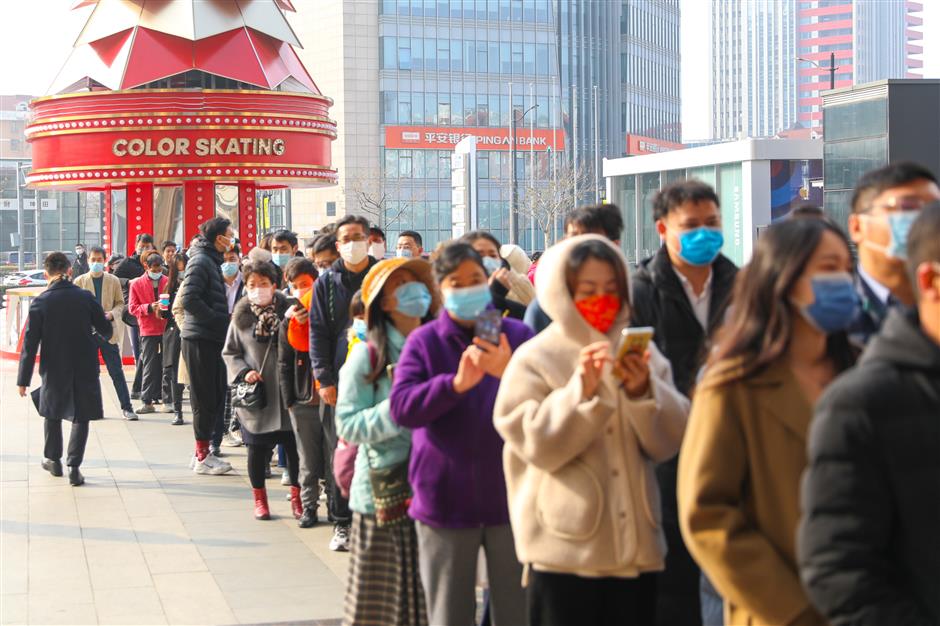 A long line of customers waits for the reopening of the mall. 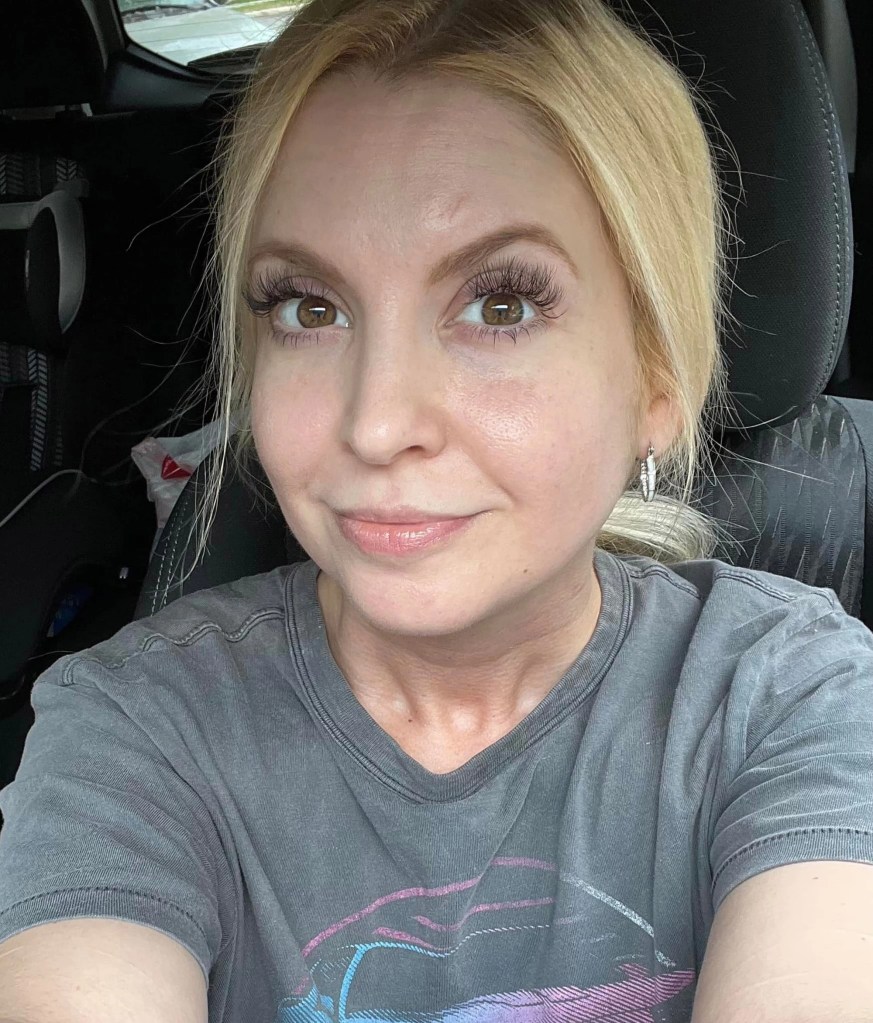 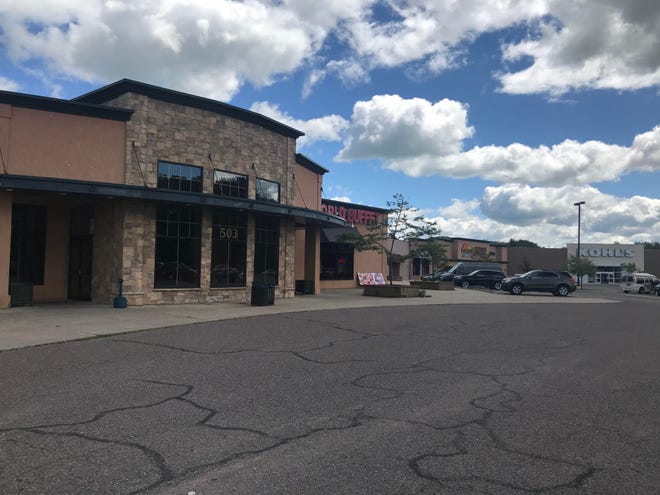