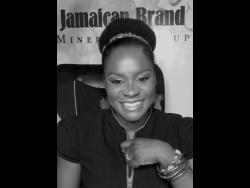 Licensed beauty therapist and entrepreneur Kareen Lamme has produced a buzzworthy documentary that makes viewers do a double-take. With a reputation for using her clients as muses and transforming them into her idea of art, she tackled a challenge to create a visual that represented the power and beauty of black women.

“What defines me as a powerful woman and entrepreneur in the make-up industry is my ability to create – my creativity and art. I mean that in the broad sense, as I am an artist, singer, dancer and actress, and through my creativity, I can convey the message of strength, confidence, and feminism, which I believe is not always [at] the forefront for young people, especially young girls,” Lamme told The Sunday Gleaner.

Inspired by the ‘Stand Up’ challenge circulating on TikTok, which highlighted the trending Cynthia Enviro single of the same name from the new biopic Harriet, she set out with the goal of attracting a wider audience to her six-year-old organic skincare and beauty brand Būtē Cosmetics and ‘kill two birds with one stone’ by also adding a history lesson. Like that of the film, which narrates the life and work of the female African American abolitionist Harriet Tubman, Lamme’s production, titled Powerful Black Women, chronicled the contribution of several names in Jamaica’s history, including Jamaica’s sole female heroine Nanny of the Maroons, prominent poet and activist Louise Bennett-Coverley, and the first female prime minister Portia Simpson-Miller.

The make-up artist shared that she was not expecting the short video to create such a stir on social media but knew that it would have a “relevant impact” on the message she was adding to what was already a popular trend.

She said, “The idea was regardless of what awareness I was putting out there, it had to represent Brand Jamaica and educate those looking from the outside in about our culture. Music and sports have given us much publicity, but how much of our history do people know in regards to what is credited to our black women? It was the opportune time for me to do this.”

A self-confessed “history junkie”, Lamme realised, after listing the women in Jamaica’s history that were influential to her, she needed to add other revolutionary moments in black history where women had contributed to incomparable change. From Harriet Tubman and Rosa Parks; Suzanne Sanité Bélair, a Haitian revolutionary and lieutenant to South African singer Zensi Miriam Makeba, known widely as Mama Afrika, were highlighted in the video.

“When you think of the song and how powerful it is, I was purposeful to incorporate other female icons. At first, I was going to do looks for males, but based on the response and reaction of viewers, not to mention the suggestions or requests … totalling more than 4,000 comments, I had to do a part two, and now, I am working on a part three,” she said. “Compared to the male figures documented in our history, there are not a lot of females – I am not saying they do not exist – because every day, another woman is creating an impact, and they deserve to be remembered and highlighted.”

Female empowerment is a core value of Būtē Cosmetics. What’s more impressive is that through the brand, Lamme, who has been practising for more than 10 years, writes her own story of success and change by being one of few female pioneers locally to manufacture an organic skincare, beauty and cosmetic line using materials grown in Jamaica, aloe vera and natural oils extracted from plants as well as minerals. With a background in chemistry, she buried her initial hesitations, did the necessary research, and established a lab in Montego Bay, St James, where she resides.

“People of colour, especially women, are always looking for products that offer benefits to their skin. I know for me, I was motivated by my career as an entertainer to develop make-up I could wear without the ill effects of wearing make-up daily, like eczema which had become a major burden on my skin. That’s why our slogan is ‘Makeup that thinks it is skincare’,” she said.

“Being an illustrative artist has offered me the advantage in so many areas that also involves colour matching and custom-blending a varying spectrum of skin tones when developing the formulations for pigmented products to answering all my clients’ needs. The brand is still growing and contributing to the promising beauty industry,” Lamme continued.