From gardens in the city to a garden city, people’s lives are continually being significantly improved in Yangpu.

Popular restaurants and trendy brands are emerging one after another in the Wujiaochang commercial area, a hub for transport, commerce and investment. It features a number of shopping malls and commercial complexes in the city’s northeast.

Wujiaochang literally means “Pentagon Plaza,” with five commercial complexes sitting at each of the five tips. Wanda Plaza, Bailian Youyicheng Shopping Mall, Hopson One, Bailian UMAX and the Wujiaochang store of Suning.com together occupy 600,000 square meters of floor space and have made Wujiaochang one of the top 10 shopping areas in Shanghai.

The four-story Wujiaochang store of Suning.com offers a wide range of products, such as furniture, antiques, electric appliances and even books, making itself a must-visit location for shoppers. Wanda Plaza has been upgraded into a fashion mall and young consumers’ paradise.

Major retailers in Wujiaochang scored 244 million yuan (US$38.1 million) in sales during the last May Day holiday, a year-on-year increase of nearly 17 percent. Online sales also grew significantly during the same period, enabling Wujiaochang overtake other time-honored commercial sites in the city, such as Xujiahui, to become the top seller.

During the National Day holiday last year, five major retailers in Wujiaochang reported 358 million yuan of sales, a year-on-year increase of more than 23 percent. They attracted over 400,000 customers every day in the seven-day holiday from October 1-7. 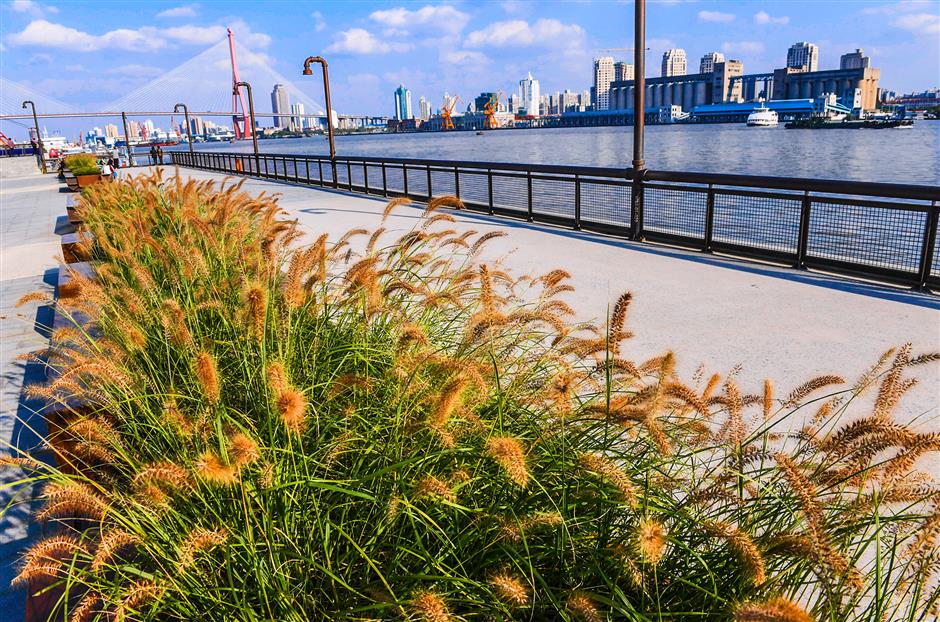 Renovation of rundown neighborhoods and other micro refurbishments have kept pace over the past five years to improve housing standards and keep residents satisfied.

Due to its old glory days last century as the cradle of China’s modern industry, Yangpu had the legacy of many rundown neighborhoods. And many old town residents wanted to say goodbye to their narrow lane dwellings.

Yangpu developed a smooth approach to solve the difficulties of the bottlenecks of the old town renovation. It collaborated with the developer and bank and won the hearts of thousands of residents who eventually bid farewell to their humble alley homes and moved into bright new houses.

The district authority customized a policy for each relocation project to ensure a good start to the renovation stages. It initiated a community planning strategy in 2018, inviting experts in urban planning, architecture and landscaping to join in the urban renewal of the district’s 12 communities.

Consequently, Yangpu’s urban areas have been transformed with a new look. Neighborhood construction has developed a community where people enjoy their lives.

Community centers take care of the elderly and children, with 60 neighborhood centers having been built across the district for people to enjoy their spare time. Within a 15-minute walk, they integrate a fitness center, creative center, elderly and youth services, library, women’s center and theater to offer locals a club on their doorstep with more than 400 service programs.

From the riverside shoreline to the middle and west of the urban area, the “stitches” of urban governance are more detailed. All sorts of services are only a 15-minutes walk away amid the continually updating old town.

With determination and full of confidence, Yangpu will continue to strive to build a “people’s city” concept and create a unique environment for residents’ happiness.

Yangpu has anchored history and embraced the future but also retained culture within its soul. Its old glory is resplendent through many valuable cultural relics.

The 2.7-kilometer Binjiang riverside public space has seven carefully preserved historic sites in an area of 70,000 square meters featuring hundreds of industrial relics. The “centennial industrial expo belt” is a symphony of an era of industrial development.

Taking a tour around the huge auxiliary plant of the previous power station, looking at the history, scanning the QR code on the wall with a mobile phone, and a journey through time and space slowly unfolds.

Over a coffee in the museum of the previous soap plant, the old atmosphere and new feelings are intertwined and integrated. On the bank of Huangpu River, the world skills museum stands still, evoking the historical past of the century old warehouse as well as the industrial skills heritage of Yangpu.

Last year, state authorities issued a plan to promote the protection and utilization of the heritage in old industrial cities, fully affirming and replicating the experience and practice of changing Yangpu’s “industrial rust belt” into a “life show belt.”

In September 2020, the State Administration of Cultural Relics announced the list of the first batch of national areas for the protection and utilization of cultural relics. Six were picked across China, including Yangpu’s “life show belt.”

The people’s urban construction planning exhibition hall was completed this year. It looks like a “wooden box” bathed in the sun. It not only continues the “gene” of the old days, but also integrates high-tech exhibition methods such as “5G plus 8K” and “3D mapping” to display a panoramic view of the past and future of Yangpu.

“Yang” means setting sail, “Pu” for writing a new chapter. Living up to its name, Yangpu is always on the move!