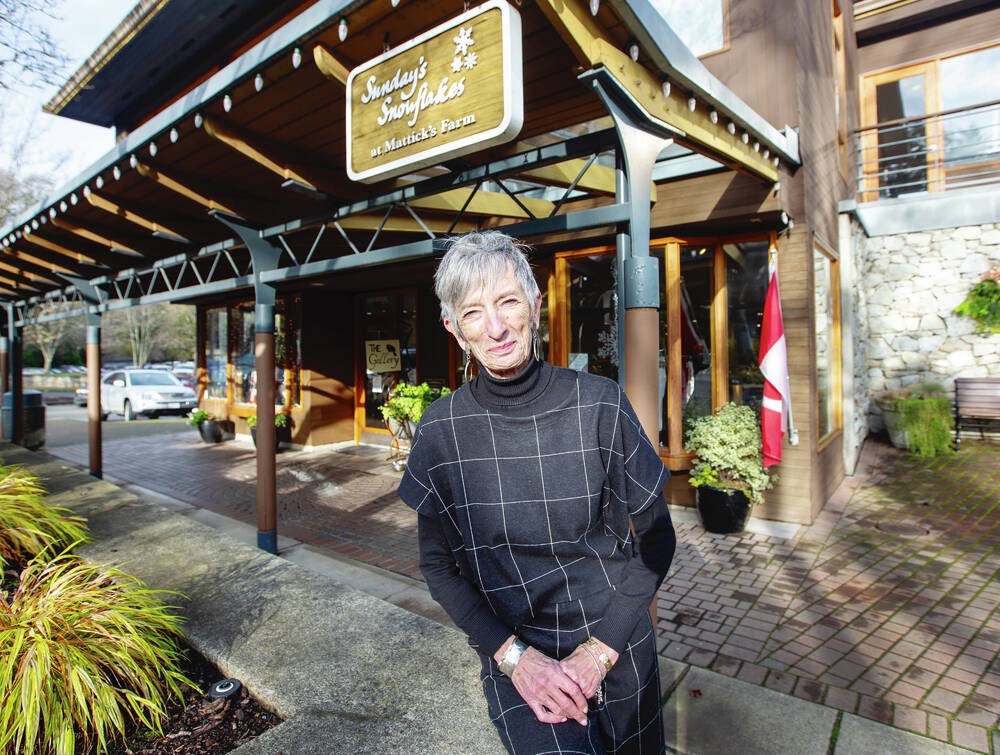 Sunday’s Snowflakes, a women’s fashion boutique at Mattick’s Farm, will close on Dec. 1

Wendy Graham has tried retirement before, but this time she means it.

Graham, who has been a force in the retail industry in Greater Victoria, will close Sunday’s Snowflakes women’s fashion boutique for good on Dec. 1, 40 years after first opening the fashion destination.

“I’m not a young woman anymore, although I feel young,” said the 77-year-old Graham, who noted with the COVID pandemic dragging on and the recent retirement of a key staff member it felt like the right time to close shop. “That kind of sealed the deal.”

Graham tried out the retirement gig 10 years ago when she shut down the large Sunday’s Snowflakes store at the corner of Douglas and Broughton streets downtown. At that point the plan was to maintain a small boutique at Mattick’s Farm and take more time for travelling and taking it easy.

However, she also opened and eventually closed two other women’s clothing stores — Curves Lingerie and Something More.

This time there is to be no return to the retail landscape.

Graham said she has decided to shut down rather than sell the boutique.

“I wanted Sunday’s Snowflakes to just have been finished. That was 40 years of my life, which is really important to me and I didn’t want it to end up becoming something it wasn’t,” she said.

While she is excited at the prospect “of being lazy for a few months” and then hopefully travelling again, Graham admits it has not been an easy decision.

“I’ve made peace with that now, but it took a while,” she said. “I’m going to miss the people. I have wonderful customers who have dealt with me for 40 years.”

In that time she has established life-long friendships and connections across the country and she says she will miss the chance to meet with them.

She said she won’t miss some of the challenges of day-to-day life as a retailer like shipments not arriving or unhappy clients, but even then Graham suggests it’s all part of being a small business.

“It’s still great. I love what I do and I’ve been lucky to spend 40 years doing something that I absolutely feel very fortunate to do,” she said.

Graham said working in the retail landscape for the past four decades has been quite a ride, having weathered several recessions, a global economic meltdown, the age of the big box stores, online retailing and a pandemic.

But she said the one constant has been a commitment to the customer.

“People are different, the products are different and there’s been so much to adapt to,” she said. “The secret [to success] has been the products and my staff. We treat every customer that comes in like they’re important. We talk to everyone, we take care of them, we look after them.”

As she looks back on her career, Graham said one of her best moves was closing shop downtown and focusing on the neighbourhood boutique in ­Cordova Bay.

At the time it was about cutting back on her stress and freeing up her time, but she believes it was also prescient and she avoided some of the problems that would develop in the core — everything from the sheer number of highrise buildings going up to people living on the street and what feels like a dwindling number of small local boutiques.

“I look back on it and it seems that was not a bad plan. I’m really distressed about our downtown,” she said. “I go down once a month to get my hair done and I will walk around and it’s so discouraging, it just makes me sad.”

She is heartened to see more vibrant neighbourhood collections of retail, services, restaurants and other businesses being established and growing such as Mattick’s Farm and Cook Street Village.

“They are really great,” she said, noting small retailers in those “nooks” get to know their customers and cater to them. “That’s what small businesses can do, and what the large ones can’t or choose not to – you’re just another sales slip on the counter. We all like to be treated specially and taken care of, and as a retailer if you do that the customer is yours.”

Graham, who has made time to give back throughout her career by sitting on volunteer boards and running fashion shows for charity, intends to maintain that to her final hour behind the counter.

As of today, the proceeds of clothing sales at the boutique will be donated to the Red Cross to help flood victims.

“That’s what I think I should do, because we all need to help build up when people are in trouble,” she said. “As a member of my community I feel it’s my responsibility.”