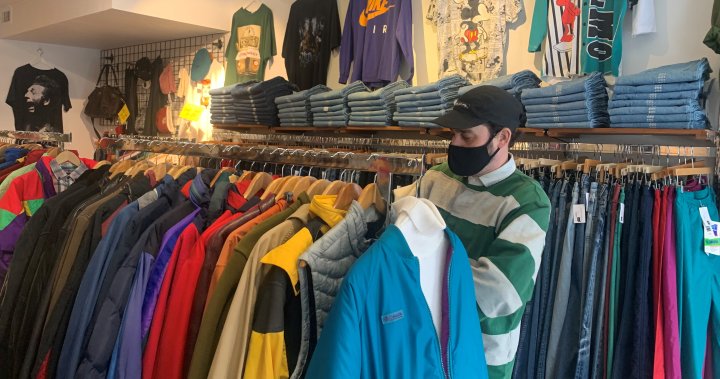 LNF Shop co-owner Charlie Whitley has been stocking his Mile End store’s racks with one-of-a-kind vintage clothing for 10 years. He was inspired by the re-sale market in Los Angeles and felt there was a need for curated second-hand stores in Montreal.

“You always find a treasure. That’s the fun thing, you know, when it’s pre-sourced like this and it’s ready for you. Odds are you’re going to find a treasure,” Whitley told Global News.

After a decade, business has never been better for the thrift shop owner.

“September was our biggest month ever since opening.”

“The teenagers right now are huge supporters and have really sort of rejuvenated the scene,” he said.

It turns out he’s not wrong, according to Anwar White from the Desautels Faculty of Management & Bensadoun School of Retail Management.

Even with virtual job interviews, expert says you should ‘dress for success’

“This kind of resurgence of vintage is something that has been prominent, especially over the last five years. But since we’ve had the pandemic, it has actually just grown tremendously,” said White.

According to White, with more people bored at home, they started reselling old clothes. Younger people who care about price value and the environment are driving the market.

“I would say roughly 80 per cent of the people are Millennials and Gen Z’s,” said White.

“I usually like to come to vintage stores — it’s mostly for the environmental impact because it’s second-hand,” said Menard, adding that it’s also “less expensive” than shopping at big brand stores.

LNF Shop is no longer in a league of its own. Vintage re-sellers have popped up all over the city. Marché Floh on Saint-Denis Street opened three years ago.

“There’s 20 vendor booths under one roof. So there’s a lot of variety and a lot of selection,” said Marché Floh owner Alex Mondry.

Mondry believes the rise in popularity of vintage clothes is partly due to the unique sense of style and creativity that comes with it.

“All our items are one of one. So you know that you won’t run into someone with the same outfit at a party type of thing,” she said.

Mondry and Whitley say if the younger generations continue to drive the industry, their businesses will grow and no one will show up to a party wearing a matching outfit again.

July 31, 2022
How the fashion industry is ‘duping’ customers into thinking they’re shopping green